Todays round two of the Super 8s was a resounding success for teamwork in general....

The sandwiches and cakes on show in the clubhouse were a real statement: the cooks amongst the parents had performed to MasterChef levels. The abundance of delicious indulgent cakes, flapjacks and sandwiches set the bar for the day at a super high standard.  This smorgasbord of baking delights demonstrated from the get go the astonishing results that can be achieved by collective effort.

And this clubhouse commitment to team work carried on through the afternoon with various players parents and siblings putting in the full nine yards to keep everyone sated.

Meantime, on the pitch the CHCC A's played with sweet purpose.

The team managed a delicious 4 wins from 4 matches record - beating Horsmonden A, Horsmonden B, CHCC B and last weeks round 1 champions, Marden.

There were some super individual efforts to celebrate in the first 3 matches. Angus, Henry, Alec, Robert and Noah scored well across their matches. Whilst Robert, Angus, Henry, Rafe and Tom bowled consistently well with pace and accuracy. Ben and Noah did especially well as they were making their first A team run outs of the year.

In the final crunch match against unbeaten Marden the CHCC A really took the team message to heart.

Their steely determination was clear from the start of the match. Batting first, our players showed their desire with their quick singles and super fast running between the wickets being the order of the day. The teamwork was great, Henry and Ollie seeing off some sharp bowling, whilst Angus and Alec really scampered between the wickets at pace to power our score upwards in the last two overs of the innings. Indeed across the whole team the batting pairs were very tasty partnerships.

Once in the field our players were on their toes, they chased down every ball hard, they constantly shouted encouragement to each other and above all they bowled with real purpose. They didn't give Marden a  crumb to feast upon.

The watching parents were vocal and excitable as the excellent game progressed. Wickets were taken by Rafe and Alec. And as the tension mounted in this close fought contest 3 exceptional run outs sandwiched together in the final overs dramatically helped our teams cause.  Then at the end of the Marden innings, Aston stepped up to the real challenge of bowling the final over and polished off the whole performance with a real closer's flourish.

Well done to the team: a super performance to finish joint top of the qualifying group (across the two rounds) and secure a place at the County Super 8s in Beckenham later in the summer. Angus Hall, Henry Parton, Robert Vizard, Alec Stephen, Tom Hobbs, Aston Burford, Ollie Paler, Rafe Rayment, Ben Anderson and Noah Flanaghan should all be very pleased with themselves and their team mates.

The CHCC Bs were also making the club proud at this home round of the Super 8s.

The results didn't go as the team wished but this was not because of a lack of appetite or team endeavour. Our players charged about the pitch with enthusiasm and energy; and they played the matches with hunger and in the right spirit.

The big hitting was really decorative and delivered with a sous chefs panache by Charlotte, Jago, Max and Elliot. Whilst the pace bowling of William McCarthy and Elliot was really fruity and of the highest order.

Even in the difficult matches our players supported each other and tried hard for their team in spite of light showers and some tough opposition. Clearly the top quality cakes and team spirit helped them enjoy the event! 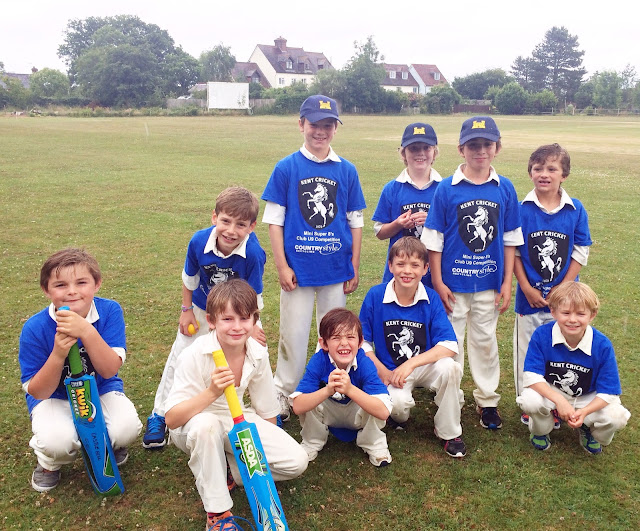 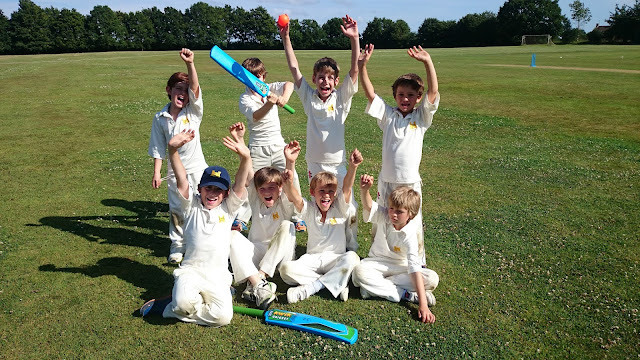 The fast draining outfield at the glorious Horsmonden CC meant that the U9s Super 8s qualifying round 1 took place in surprising sunshine this afternoon after a miserable morning of persistent rain.

The opening match of today's league was the big one, with the mighty Marden taking on our very own Castle Hill A team. This clash of the titans proved to be a bruising encounter for our boys.

The Marden bowlers came out of the blocks at pace - skidding the ball down the still damp wicket with precision and guile. Their rapid attack caused our slightly sluggish batters a good deal of trouble as the ball regularly found the gap between bat and leg repeatedly knocking over the plastic wickets.

Unfortunately, the CHCC bowlers did not manage to hit the same disciplined line and length as Marden had achieved and so in spite of sharp, effectively frugal fielding, the CHCC boys went down in a close match. Indeed, the CHCC five lost wickets proving the difference between the teams.

From this game on the CHCC A team raised their spirits and performance levels winning all three of their remaining matches. Angus Hall was ferocious with mighty swings of his bat; Robert Vizard bowled with pace and bounce from a new angled run up, whilst Harry Leach batted aggressively and took some exceptional reflex catches behind the stumps. A special shout out to Henry Parton for some remarkable play - as usual he batted well and bowled sharply; stand out today was his fielding - specifically a famous one handed caught and bowled plus a remarkable stretching diving catch both of which brought gasps from the crowd.

Meantime the CHCC B team was competing hard in their own matches and came away from the day with a creditable won 2 lost 2 score line from their four matches. After a difficult time against Marden and CHCC A team, the boys set about taking the other two (Horsmonden) teams apart.  The Horsmonden B team were comfortably dispatched; the highlight of the team's day was a tense 4 run win over their A team in a tight encounter.  The star of the show was Oscar Anderson taking a wicket in the final over to seal the win.

Debutant Noah Flanagan skippered the team positively in his two games as leader, as did Robert Henderson-Pratt and Ben Anderson in their games.   The energy, commitment and determination of Elliot Freeborough was notable, even being commented on by opposition coaches who were impressed by Elliot's huge desire to win and his super all round skills. Ben Anderson batted and bowled well too and he was stellar in the field taking a blinding catch of a baamethyst came at him like a tracer bullet.  Meantime Oscar Anderson continues to impress with a finely developing talent as a slow bowler.  Other highlights were Robert Henderson-Pratt's impressive catch of a skier in the deep and Noah Flanagan taking 2 wickets off consecutive balls against the mighty Marden.

We wish both teams well in the return matches to be held at our own idyllic ground next Sunday; at the moment CHCC A team are in second position and CHCC B team are in third position in the league table. The top two teams qualify for the regional finals, so please do cheer us on!